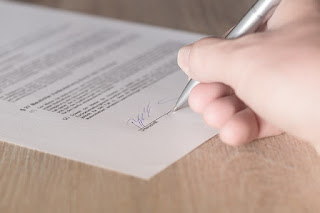 According to Section 2(h) of the Act, the term contract is defined as “an agreement enforceable by law”.

There are various essential elements of a contract:

1.     Proper offer and Proper acceptance with the intension to create a legal relationship.

5.     Agreements are not declared void or illegal

7.     Possibility of performance of an agreement.

a.      Valid contract: An agreement which is binding and enforceable is a valid contract.

b.     Void contract: It is a contract without any legal effect and cannot be enforced in a court of law. It is define in Section2 (j) of the Indian Contract Act.

c.      Quasi contract: A quasi-contract is not an actual contract but it resembles to a contract.

3.     ON THE BASIS OF PERFORMANCE OF THE CONTRACT:

b.     Executory contract: It is so-called because the reciprocal promises or obligation which serves as consideration is to be performed.  For example, where G agrees to take tuition of H, a pre-engineering student, from the next month and H in consideration, promises to pay G RS. 1000 per month, the contract is an executory contract because it is yet to be carried out.

1.     General offer: It is an offer made to the public in general and hence anyone can accept and do the desired act.

2.     Special offer: When offer is made to a definite person, it is known as specific offer and such offer can be accepted only by that specific person.

3.     Cross offer: When two parties exchange identical offers in ignorance at the time of each other’s offer, the offers are called cross offers.

4.     Counter offers: When the offeree offers to qualified acceptance of the offer subject to modifications and variations in terms of original offer, he is said to have made a counter offer.

ACCEPTANCE: A proposal or offer is said to have been accepted when the person to whom the proposal is made signifies his assent to the proposal to do or not to do something.

The rules regarding acceptance are:

1.     Acceptance must be absolute and unqualified.

3.     Acceptance must be in the mode prescribed.

COERCION (SECTION 15): “Coercion” is the committing, or threatening to commit, any act forbidden by the Indian Penal Court or the unlawful detaining or threatening to with the intension of causing any person to enter into an agreement.

The threat of suicide amounts to coercion within Section15.

UNDUE INFLUENCE (SECTION 16): A contract is said to be induced by “undue influence” where the relations subsisting between the parties are such that one of the parties is in a position to dominate the will of the other and uses that position to obtain an unfair advantage of the other.

Example: A father, by reason of his authority over the son can dominate the will of the son.

FRAUD (SECTION 17): As per the Act “Fraud” means and includes any of the following acts committed by a party to a contract, or with his connivance or by his agent with intent to deceive another party thereto or his agent, or to induce him enter into the contract:

1.     The active concealment of a fact by one having knowledge or belief of the fact;

2.     A promise made without any intension of performing it;;